Written by Erin Santos, Isabella’s Mom & ISF Executive Director. Help us raise $10,000 today for the 10 years Isabella has been gone. Donate now in her honor and her big legacy that continues to do big things for kids fighting cancer!

Every year as June 28th approaches, my mind begins to work early in the month to do my normal protection of my heart.  10 years.  How is that even possible?  While it does feel like time has passed, 10 years is a lifetime.  Last year a donation to Levine and a very busy and hot day at Firethorne Country Club kept my mind busy to say the least.  This year our golf tournament falls on the 27th which puts the 28th very open for me.  I have filled it with eye appointments for Sophia, my final wedding dress fitting, a facial – you name it.  Keep. It.  Moving.  But while it’s important to keep me busy, I have finally found that doing something special in her name on these difficult days, changes the day for me.  So when the team and I sat around brainstorming ideas – one began to float to the top.

It should have been simple really because it goes back to our age-old question of what she would do.  So much of the foundation is on her belief to make the world a better place for others.  Sure, we have large missions of her in place like, saving lives.  Of course, we try to do this every day.  Today will be no different as we make another large donation of $200,000 to Levine Children’s towards the program that bears her name.  But one of the things she also believed in was living each day as if it were the most important day.  How many times was she walking around with a vomit bucket at Disney World, learning how to swim whenever she had downtime, or decorating cupcakes when she finished her treatment in New York City at Magnolia Bakery.  This was her life every single day.  People used to say that you would never know she had cancer, except for that beautiful bald head.

So for her 10-year anniversary passing, we are going to do all the things she loved.  Actually, SHE is going to provide all the things she loved – to those in need.  When I started naming things off, it just made sense.  $10,000 in scholarships to everything that defined her – to be set aside for kids fighting cancer at Levine who need a good day. 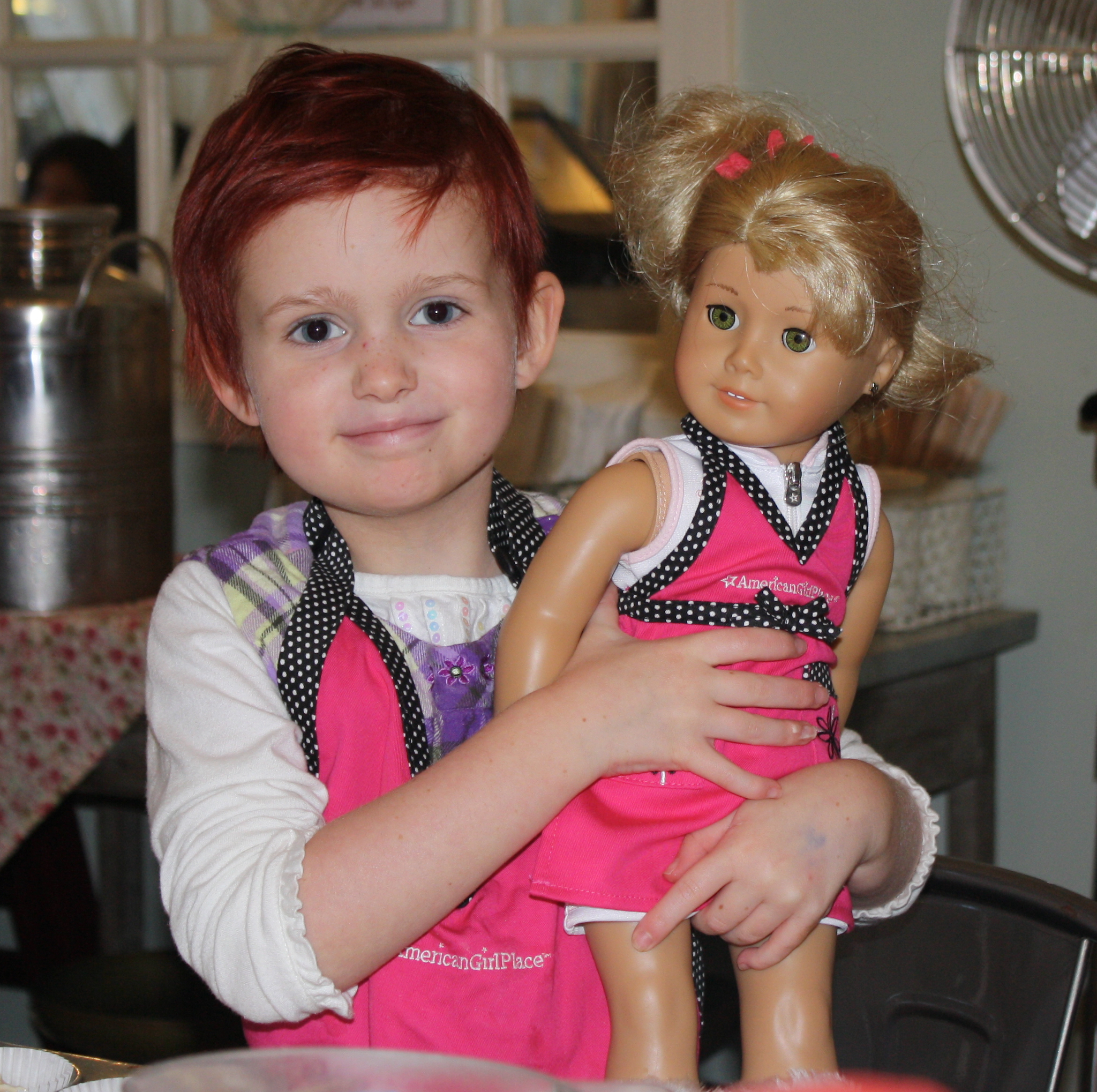 I remember the day so clearly and have the picture of her framed in my bedroom still.  Her bright red hair, her purple plaid Janie and Jack jumper, her American Girl doll Janie there for it all.  They wore matching pink aprons and decorated cupcakes for hours in the private room of Magnolia’s bakery.  I of course got a call during that session that her cancer was back in her brain, but I was determined to not let it ruin her day.  We walked into MSKCC with dozens of decorated hot pink cupcakes with sprinkles for all the nurses.  They of course knew the news of the relapse and graciously ate every single cupcake. We all know the stories of her there in her fabulous outfits, barefoot because her feet were so swollen – painting animals as she chatted up the owners and anyone else who would listen.  We still have the paintings.  Jake is my favorite.  When I would take Sophia there later in life, the place was just dripping in Isabella.  It’s as if it were her shop.  The smells, the paintbrushes, the quiet sounds of kids – trying to make a masterpiece. The amount of American Girl dolls that I still have in my attic would floor you.  We had to make a stop every time we were in NYC to get a new outfit, have her dolls hair done, or ears pierced.  American girl prizes were used to bribe her to hold still for CT scans, a promise of a drop-in if we could just get through the day.  When the President of Mattel starts sending you packages in the mail – those packages will blow you away.  Why does a doll need a fake fire pit for roasting marshmallows?  Who knows, but we have one. We have a whole freaking campsite – just to name a few. When TopCat Stacy arrived at our house with a cheerleading outfit for her to wear that weekend at the Panthers game, she was ecstatic.  I don’t think we understood what we signed up for that day as we arrived at the stadium.  Red carpet treatment.  This kid was in her moment.  Dancing with cheerleaders, hugging anyone who asked, eating plates of mac and cheese.  The day was cold and she was tired but she tried so hard to take in every minute, until half time when she crawled up on Miss Chrissy’s lap and slept for a quarter.  Her picture still hangs in the locker room and she has become a legend in that facility.

She has ruined her music still to this day for us all.  Grant listens when he wants to be reminded, or sometimes I think to feel her pain.  We went to her concert, I sat with her, seats in a private box that someone donated to her.  She could barely stay awake to see her come on stage, but when she did – she knew every word.  Another instance where everyone found themselves watching her instead of what they came to see.  She wore her concert t-shirt in the last couple of days she was alive.  I remember taking a picture of her in it – she quietly asked me to no longer take pictures of her.  So I didn’t.  Taylor Swift called and talked to her before she passed but it was just a few days too late.  It is still Grant’s claim to fame though.  🙂  He did most of the talking Nothing will make you feel like your kid is a big wussy in the water until you see a little fragile bald girl jump in the deep end in the pool with an instructor.  I would sit in the parent observation area and watch her, also realizing that every other parent was too.  I’m sure all thinking, how lucky they are.  She would swim up until a few weeks of her death. Jake.  That’s it.  Just one word.  It was all she wanted.  Begging day after day to get a kitten.  Stuart was allergic and we were not cat people anyway.  But parents can only take so many relapses.  So when we found ourselves at her bedside after a brain surgery to remove a tumor and the first things she asks for is a cat – you get her one.  The video is priceless.  Jake jumped out of big box and the bond was created.  He wasn’t a normal cat – because why would he be.  He was like her own little baby that she would cradle and hold.  She would dress him in American girl clothes and walk him on a leash.  After she passed, one night he went outside and never came back.  My hope was that he just wanted to be with her. She wanted to be a ballerina just like every little girl, however, treatments got in the way.  So when she felt good, she would go and sometimes she could dance, and sometimes she couldn’t.  This was one I couldn’t watch.  I was frustrated that basic soft dancing wore her out.  She was frustrated too.  But, like most organizations, they were patient with her, and maybe even with me too.  They support us to this day. Or maybe lack there of when it came to Isabella.  My biggest fights with Isabella were about fashion.  So many things she refused to wear because they were itchy or didn’t feel right.  Having bone marrow aspirations done on the front and back of your hip bones meant no pants EVER!  I finally gave up.  Luckily she had a personal shopper in Miss Chrissy who took her to Janie and Jack to buy ridiculous dresses, holiday outfits, ugg boots, you name it.  I always feel like she felt no control in her life – so this became what she wanted to control.  I had to give in.  But man was it awful at times. The happiest place on earth.  Yep!  It sure was for her.  Her Make-A- Wish trip opened the door and we never looked back.  I can’t even tell you how many times we went.  Red carpet treatment every single time too.  It almost ruins the place for you forever.  So many amazing memories there with my Mom and Grandpa Bob.  She was barely unhooked from chemo and we would be on the road.  Vomit buckets, bucket hats, big sunglasses – you name it.  She was prepared.  Her last trip was just 3 weeks before she died.  We weren’t sure she was going to make it.  A breakfast event that I will never forget where every single Disney character came to see her.  How does someone even organize that for a child?  We will never know how it happened.  But I have to tell myself it was the ultimate gift for a child everyone knew was going to change the world.

As we procured this list – I knew this was perfect.  Every time I try to tell someone about it, I break down.  Which is hard to get me to do anymore.  I can’t even think about these items because memories flood back so strongly and I sob like a baby – even after 10 years.  Good memories though – which means this is what she would do.  Definitely. It still amazes me how even after 10 years, she can still whisper so clear to me how to make the world a better place for others because that’s all she ever wanted.

Thank you for all your support over the last 10 years! I can’t put into words what it means to me and my family!

Although we are granting $10,000 worth of scholarships/grants in honor of our founder, we hope you will join us by paying it forward on this special day.  Help us raise $10,000 today for the 10 years Isabella has been gone. Donate now in her honor and her big legacy that continues to do big things for kids fighting cancer!

The Day She Left Us: A Mom’s Journal Entry About the Day She Lost Her...